SV Companies proudly supports One Earth Conservation, a not-for-profit organisation which develops empowering programmes designed to build knowledge, motivation, resilience, and capacity in people, organisations, and communities, where parrots are native, in central and south America, and internationally so that they can better cherish and nurture themselves, nature, and other beings.

One Earth Conservation invites people into a vision and practice of interbeing, based on:

Projects of One Earth 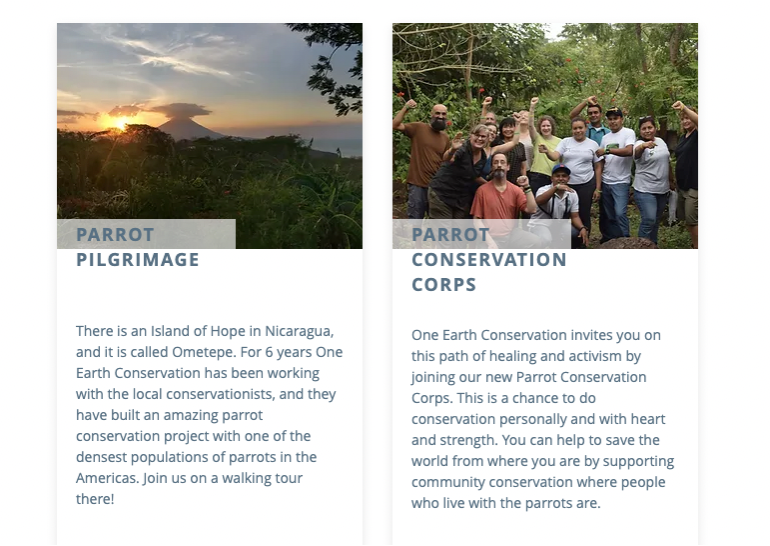 Some of One Earth Conservation Projects supported by SV Companies

In 2014, not one wild scarlet macaw chick in the core conservation area of Honduras (village of Mabita) escaped the illegal wildlife trade; all nests with chicks were poached. In 2016 and 2017, not one wild scarlet chick in the core conservation area entered the illegal wildlife trade. In 2018 20% nests were poached, in 2019 9% out of 102 registered nests were poached, and in 2020  10% were poached out of 153 registered nests! Team members are patrolling 1.2 million acreas, making this the largest community patrolled parrot project in the world. Parrots, communities, and habitats are being preserved in La Moskitia, Honduras through nest monitoring, nest protection, rescue and liberation, and community awareness, education, and enhancement programs.

One Earth Conservation guides and funds population monitoring of parrots on the islands of Lake Nicaragua, also known as Lake Cocibolca.  They have found on both Ometepe Island and Mancarron and Mancarroncito of the Solentiname Archipelago the endangered yellow-naped amazon in numbers worthy of conservation.  Ometepe Island has one of the densest, if not the densest and most numerous populations of this species in all of it’s range.  They are involved in nest monitoring and protection, as well as the education, awareness, and community enhancement aspects of these important conservation areas. Currently working in 4 villages and supporting the team there, BIOMETEPE, to lead conservation efforts.

In this region of Paraguay, One Earth Conservation has been working with various partners since 2014, including the NGO organization, Guyra Paraguay, wildlife veterinarian Dr. Andres Alvarez and government agencies. They have been studying parrot populations to determine their status, and the nesting success of various threatened species. In 2019 began nest monitoring and nest protection in several locations, documenting on going poaching and 3 macaw species in big trouble in the country – the hyacinth macaw, the blue-and-yellow macaw, and the red-and-green macaw. In 2020, grew their presence in the area with frequent and prolonged fieldwork conducted by Dr. Alvarez. In 2021, they will place nest boxes in the project area to increase the availability of nesting cavities, and also hopefully increase a conservation presence there by supporting students and eventually developing ecotourism at the site. One Earth Conservation is the only funder of wild parrot conservation efforts outside of urban areas in Paraguay.

For more information about One Earth Conservation please visit: https://www.oneearthconservation.org/

2021 Annual report can be found below.